Friday at 9:07:42 PM CET December the 9th, 2022, the genesis block of the Joystream mainnet, with hash 0x6b5e488e0fa8f9821110d5c13f4c468abcd43ce5e297e62b34c53c3346465956, was finalised, and production and finalisation of the first blocks began. The full release, including node binaries and chainspec, can be found on the Github release page. For the uninitiated, the Joystream blockchain is a new standalone PoS L1 blockchain based on Substrate, but it is not a parachain. The easiest place to explore the network at this time is this block explorer, where you for example can check your account balances and early validation candidates.

While the chain is live and memberships have been migrated, the launch itself is not over. This will happen over a number of stages, and we are now only in the initial Frozen stage. For a full breakdown, read our launch process guide, but we have summarised the major stages and their role in the table below.

Recent times have been a difficult period in the blockchain and tech industry broadly, and so it's worth taking a step back and appreciating the long journey the Jsgensis team and broader Joystream community has been on to reach this milestone. One factor which always set Joystream apart as a project was that the objective to have the system be financed, directed and operated by the community was taken very seriously as a requirement to be satisfied from the very first mainnet block. Since the project also had a very broad and ambitious scope, that meant that a very long run view had to be taken on attracting, training and retaining exceptionally qualified community members to play this instrumental and very skill intensive role.

The project began in late 2018 with three people working distributed at Jsgenesis, some funding, a few years of experience as builders in the space and a big vision. We found ourselves at the tail-end of a difficult bear market at the time, not so different from today.

As we started to design the architecture of the system, we quickly understood that we would need our own standalone blockchain in order to have full control over our block space, fee system and execution environment, and be able to select a decentralisation, performance and security tradeoff ideal for our use case. We proof-of-concepts launching our augmented Ethereum fork, Cosmos SDK and Substrate, and quickly found that the latter was the best alternative for us because it

A Marathon of Testnets

We knew we were going to be building a large system for a long time, and we had to find some way to learn and get feedback while building, not only to manage the execution risk that came from the inevitable planning and design failures, but also to make room for our growing community to continuously learn how the system worked, and how to work with each other. With this goal in mind, we took inspiration from the Ethereum protocol upgrade model of naming distinct upgrades, and the Cosmos incentivised testnet model for training validators on testnet, and started running incentivesed testnets. Each network had a well defined and coherent goal in terms of technological iteration and/or community development.

*The upgrade to Babylon caused a chain split which was remedied by upgrading to a new version of Substrate, and Antioch was effectively identical to Babylon in every other way.

Once the chain had technically matured to a level where there was something interesting and substantial for a prospective community to try their hand at, we started to think about how to provide sufficient encouragement for people to give it a try. We started out very simply paying out contributors, such as validators and council members, in early 2019. In mid 2020 we had a bigger community, and the on-chain governance model and range of different roles available had expanded substantially. We kept iterating on our testnet incentive model, attempting to limit the difference between the testnet and future mainnet, but so far we had not started actively distributing mainnet tokens to the community.

As a governance-heavy system, we knew that a key determinant of success would be the extent to which community members would be able to accumulate robust public reputations which they would have an incentive to protect and cultivate, in order to access key platform roles and resources, by limiting abusive behaviour and investing in their own Joystream specific knowledge and relationships. This was for example one of the main reasons we knew we had to have distinct actor identifiers, in the form of memberships, as distinct from raw accounts. It was with this backdrop we decided to launch our Founding Member Program in early 2021. In this program, we would not only establish a scheme for non-US community members to acquire mainnet tokens, but also define a distinct, and highly selective, status for a subset of memberships who were able to earn a sufficiently high amount of tokens, namely Founding Members. Such a status would also be celebrated by the creation of a unique avatar in the style of the Joystream brand identity, and also a special on-chain decoration transaction providing a scarce immutable mark for these members. We have been delighted to see the community embrace these stylish avatars, and Pioneer already gives a special display style for memberships with this mark.

Importantly, the founding member status was later taken to include anyone who has worked directly in association with Jsgenesis, and depending on the context the term Founding Member may or may not include such Jsgenesis persons, which may be a bit confusing.

A lot has been built, and today Joystream is pretty much a self-contained and vertically integrated technology platform spanning everything from content-delivery and governance to content publishing and NFT auctions. It is a monolithic system optimised for the singular use case of being a video publishing, delivery and monetisation system. This allows us to sidestep the considerable UX, execution and operational costs of attempting to cobble together a web3 technology stack which is still very much in motion. Here is a brief overview of each of the major components that make up the technical side of Joystream, and of course, it's all 100% open-source.

Two major reviews have been conducted of the Joystream node and runtime code, one performed by SRLabs and one by Quarkslab, industry leading auditing partners for projects based on the Substrate, such as Polkadot and Kusama. The audits were focused on the blockchain primarily, and they are available publicly.

In the end the Genesis block has the following breakdown in terms of share and vesting for various allocation purposes.

Notice that there is a new, not previously mentioned, membership airdrop pool which was used to fund a subset of the 4347 memberships that were migrated over from Carthage which did not have a controller with funds allocated due to some other reason.

This program evolved through many stages, with lots complications, but now as of mainnet launch, the program is over.  For a full history of the program, please read this. Here are some interesting statistics worth considering.

The most important activity to get right at this early stage is to develop a vibrant validation and nomination sub-community within the project. This is actually an activity we, in relative terms, underinvested in as part of our testnets.

We already have a solid pool of full nodes running, but at this stage only the Jsgensis nodes participate in validation. We have transitioned to the Thawn stage at this time, hence the validator is now open, but generalised functionality is still be restricted. The most eager validators have been preparing for weeks, and one can find some operational information about them on our Meet Your Validators page. Many are already signalling their intent to validate, and nominators can stake in favour of validators already at this time. For anyone interested in validating, we refer them to our validation guide.

We encourage all stakeholders who hold $JOY to consider nomination, both for private returns but also the security of the network. Also remember that tokens subject to vesting can be used in such nomination, and also simultaneously in voting during council elections. Read our nomination guide to get started.

There are plenty of ways to get involved in Joystream, both near-term and long-term. Near-term, participating in validation and nomination, as described above, are most useful. Using the broader functionality of the system, such as balances transfers, voting or publishing, will not be possible until we are in the Supervised phase, which currently is likely to happen some time this week. It's only at this point the governance application Pioneer becomes usable, and the first council can get elected. From this point on, there is a very broad range of activities people can jump into. The best place to get acquainted with these roles it to check out the Opportunities section of our handbook, but here is at least a list of titles to peak your interest:

All forward looking statements, estimates and commitments found in this blog post should be understood to be highly uncertain, not binding and for which no guarantees of accuracy or reliability can be provided. To the fullest extent permitted by law, in no event shall Joystream, Jsgenesis or our affiliates, or any of our directors, employees, contractors, service providers or agents have any liability whatsoever to any person for any direct or indirect loss, liability, cost, claim, expense or damage of any kind, whether in contract or in tort, including negligence, or otherwise, arising out of or related to the use of all or part of this post, or any links to third party websites. 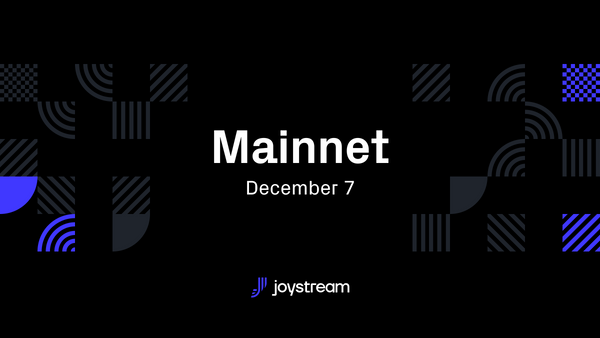 Mainnet is finally just around the corner.